Here are some of our more recent events that we’re allowed to talk about :)

Cold City - Ember Phoenix Ember Phoenix, a UK based rap artist (and owner of the Cold City clothing brand) selected a location close to BTTFCarHire's HQ for a candid video and photo shoot. With the use of a drone, stabilised camera and digital effects, this is certainly one video we're really looking forward to seeing the finished article of.

Malcolm Ryan Studios The Delorean Time Machine looked right at home in London-based Malcolm Ryan Studios, where the car was filmed as part of a debut single for an up-and-coming rapper who was recently signed to a major record label. Sorry, but we can't say any more than this :)

Specialist Cars BMW in Stevenage We were honored to be part of the BMW MINI Electric launch event at Specialist Cars BMW in Stevenage. The Delorean Time Machine was parked inside the main showroom between one of the very first Mini's to roll off the production line in 1969, and a brand new MINI Electric. The event was a big success and attracted a lot of attention from the public. 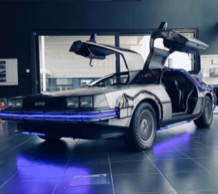 CoinGeek Party (at The London Reign) Situated right in the middle of Picadilly Circus, The London Reign is an exclusive nightclub that promises to take its guests on a journey of indulgence and escapism. As part of a private event for a Cryptocurrency convention called CoinGeek, our Delorean was hired to park right outside the venue for arriving guests to have their photographs taken by paparazzi. Thankfully the venue also hired a security team to help manage the crowds, as the Delorean proved to be a massive success with both the guests and passers by.

Jimmy’s Farm (Film Feast UK) TV Celebrity Farmer Jimmy’s Doherty asked us to attend their Back To The Future themed evening in association with Film Feast. The car was positioned at the entrance to the venue and was said by many to be the star of the evening.

By Slik (Up and Coming Fashion Brand) Photo shoot and filming in urban London for a newly launched clothing brand. The iconic Delorean literally stopped traffic! 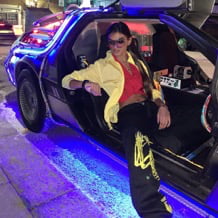 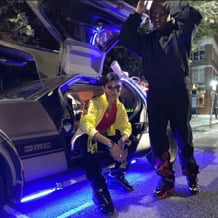 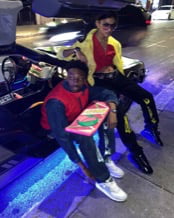 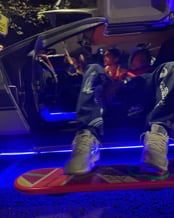 Adventure Island Theme Park We were asked to attend Adveture Island’s “Guestival day” in celebration of their staff and guests. The car was on display in the center of the park for photo opportunities. BTTF Car Hire managed the crowd allowing over 300 guests to sit in the car in exchangefor donations to the Southend Hospital for Wards appeal. 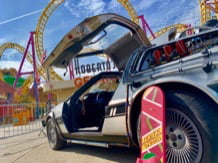 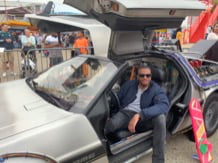 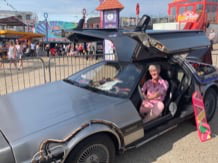 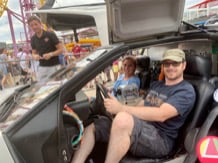 Frankies Car Fest (Ford Motor Company, Dunton) The Delorean was asked to be a show piece next to the main stage at a charity event hosted by Ford Motor Company. Over 5,000 people attended and the day raised £33,000 for Saint Francis Hospice. Elvis even had his photo taken in the car! 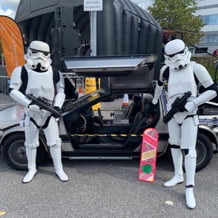 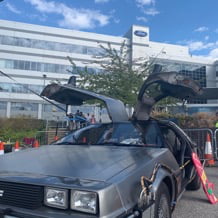 Contact us now to hire a Delorean Time Machine for your wedding, corporate event, movie screening, product launch, birthday, photo shoot, exhibition, 80’s retro event, festival or other special occasion. We hope to see you in the future!

Chat to us on FaceBook Message us on Whatsapp